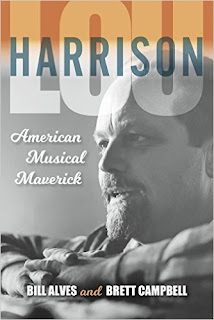 Lou Harrison: American Musical Maverick is a new biography of one of America's most original and beloved composers, by Bill Alves and Brett Campbell, now available from Indiana University Press in time for Harrison's centennial this year. In this blog, we will be keeping track of some of the events in honor of Harrison's hundredth birthday and sharing some fascinating tidbits that didn't necessarily make it into the published biography.


American composer Lou Harrison (1917–2003) is perhaps best known for challenging the traditional musical establishment along with his contemporaries and close colleagues: composers John Cage, Aaron Copland, Virgil Thomson, and Leonard Bernstein; Living Theater founder, Judith Malina; and choreographer, Merce Cunningham. Today, musicians from Bang on a Can to Björk are indebted to the cultural hybrids Harrison pioneered half a century ago. His explorations of new tonalities at a time when the rest of the avant garde considered such interests heretical set the stage for minimalism and musical post-modernism. His propulsive rhythms and ground-breaking use of percussion have inspired choreographers from Merce Cunningham to Mark Morris, and he is considered the godfather of the so-called “world music” phenomenon that has invigorated Western music with global sounds over the past two decades.

In this biography, authors Bill Alves and Brett Campbell trace Harrison's life and career from the diverse streets of San Francisco, where he studied with music experimentalist Henry Cowell and Austrian composer Arnold Schoenberg, and where he discovered his love for all things non-traditional (Beat poetry, parties, and men); to the competitive performance industry in New York, where he subsequently launched his career as a composer, conducted Charles Ives's Third Symphony at Carnegie Hall (winning the elder composer a Pulitzer Prize), and experienced a devastating mental breakdown; to the experimental arts institution of Black Mountain College where he was involved in the first "happenings" with Cage, Cunningham, and others; and finally, back to California, where he would become a strong voice in human rights and environmental campaigns and compose some of the most eclectic pieces of his career.